What drew you to photography?

I always loved taking photos as a child, especially on family trips. I’m quite shy and preferred being behind the camera instead of in front of it. I bought my first DSLR in early 2012. Then, in June of that year, I travelled to the US for the first time. I visited Nashville for a music festival and spent a lot of the festival photographing various concerts and artists. I self taught myself how to use all the manual settings of my camera. Dealing with low-light at concerts was a huge learning curve at the time. I also visited New York and, like most photographers, find the city very inspiring for creative work.

By the end of 2013, I was exploring and photographing my home city of Brisbane, Australia. I became obsessed with long exposure night photography. For a couple years, I shot mostly cityscapes at night. I visited New York multiple times in 2016 and 2017 and from that point onwards I feel like my photography has really developed. I started shooting more landscape, nature, and street shots. Expanding the subject matter of my photography has really pushed my creativity and evolved my style.  In the last few years, I’ve traveled more around Australia to Sydney, Melbourne, and North Queensland.  I visited famous places such as the Great Ocean Road and the Great Barrier Reef.

I went to school for graphic design, which also had an influence on my creativity and eye for photography. Editing and post production is a huge part of my process. I enjoy it as much as going out and shooting. For me, it’s the final piece of seeing a photo come to life.

Like most photographers, I draw inspiration from the world around me, whether it’s city buildings and architecture or nature. The way the light hits a building and creates a shadow.  Movement is also important in capturing a moment, especially when doing long exposure shots or having a person as the focal point of a street shot. I’m also inspired by so many photographers on Instagram. They inspire me daily to push myself creatively and try new things.

What type of camera do you use?

I currently use a Canon EOS 550D, the camera I bought in 2012. I’m hoping in the next year to finally upgrade to a Canon EOS 5D Mark IV.  I think I’ve finally outgrown my current camera and can’t wait to play with a new toy!

What are some projects you have recently worked on?

Most of my projects are personal projects and usually revolve around exploring and capturing a certain place.  I recently visited Kings Park on Long Island which has an abandoned psychiatric centre that opened in 1885 and has been closed since 1996. I have a fascination with abandoned places, so I was excited to photograph some of the buildings.

Also, at the end of last year, my husband and I took a spontaneous overnight trip to Philadelphia. It was refreshing to visit a city I’d never been to before and create something new for myself. We didn’t have much snow on Long Island this winter, but I recently visited Upstate New York and captured some snow around the Lake George area. I’d been there once before in the fall of 2017. It was interesting to compare photos from the two different seasons.

How is print part of your creative process?

I love seeing my photos printed. It gives you a certain thrill seeing them in a physical form. The majority of my photos never get printed or, if they do, only small prints. It’s something that I’d like to do more and certainly larger prints. Having my photos displayed in someone’s home definitely gives me a sense of gratification. Also, by seeing my photos printed, I often find aspects that I can improve in the future, that I hadn’t noticed on a screen.

What has been your biggest challenge pursuing a career in photography?

I think my biggest challenge has been getting my work seen. There are billions of photos being uploaded to the internet every day. The average person's attention span is drastically shortening because of the internet. Trying to stand out enough for someone to stop scrolling their feed and notice your photo is a huge challenge for any photographer.

What advice would you give to someone starting a career in photography?

My advice to other photographers is to go out and shoot as much as possible, especially in different weather conditions and times of day. Take inspiration from other photographers in terms of the thinking behind why they framed a shot a certain way, then try to apply that in your own way. 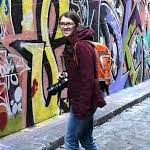 Australian-born Nicole Sgroi recently moved to Long Island, New York. She is a qualified graphic designer and self taught photographer. She currently runs her creative studio Sgroi Design Co. with a focus on elevating brands through design, illustration and bold imagery.  When she isn’t designing, she enjoys photographing the world on her travels with her husband, playing soccer, or adding to her sneaker collection.

Deborah Lalehzar is a former marketer and writer for Mimeo Photos. In addition to her passion for photography and music, Deborah loves to travel and celebrate creativity.