What drew you to photography?

I started taking pictures of the things I was doing with my phone. From there, I decided I’d start a new hobby and capture these really good moments ﹘ but even better.

So, I just got a camera and started. Phones are great pieces of technology but cameras are even better to shoot with. Once I began, the technical or editing side of it took off.

The photos that we love the most are edited to look more like what we see.

For me, photography became more about the technical details of capturing photos. Many of the photos I’ve captured are landscapes and actually several images overlaid. This ties elements, like lighting, from multiple photos into one image which makes it look more like what we see.

Who are your biggest influences?

Trey Ratcliff. He is the everyman’s photographer. Ratcliff captures a moment and then edits it in such a way that it looks like how it actually felt to be physically present there.

He doesn’t overly Photoshop his work. Rather, he changes the color, adjusts the light, and alters the tone so, as a viewer, you instantly have that feeling like you’re right there.

I frequent popular photography sites and look at images I like. The details of how the shot was taken interest me. When I begin to understand the details ﹘ what recipes or settings ﹘ I know I can get the results.

I’ve been wanting.I’m often asking myself, “How do I get this sort of effect?” followed by “Where do I go to capture it?”.

This attention to detail can be harder to turn off for me than it is to just be inspired. I just have to decide when to give into it.

What are some projects you have worked on recently?

I’ve worked on charity shoots and fundraisers. Everything from the human society to the Missouri Symphony and the Boys & Girls Club. A fair amount of my photos are licensed and they’ve been featured in Missouri Living Magazine, Southwest Airlines Magazine, and Thrillist.

Ironically, I was walking down the street and noticed a movie poster for a Stephen King film, The Dark Tower, and I noticed the shot looked familiar. Sure enough, it was a shot I’d taken of the Empire State Building. I went to my local Barnes & Noble to discover they’d released a new cover of the book as well also featuring my photo.

Another one of my shots is featured on James Patterson’s novel, “Red Alert,” and I’m credited within it.

How do you use print as part of your creative process?

Last year, I decided I’d experiment with selling calendars that feature my photos. I’m based out of Columbia, Missouri and, by default, I have a significant amount of photos of the local landscape.

I created a Mimeo Photos calendar with shots from around Columbia and sold them through my professional Facebook page. There’s no penalty for ordering a single calendar through Mimeo Photos. This essentially eliminated any investment risk for me because I can create more calendars as orders come in.

This year, I’ll create another calendar series around Columbia, a black and white series, and a series for pictures I like from my travels.

What are some of your favorite cameras to shoot on?

I shoot Sony, but my phone is a Huawei P20 Pro. It’s actually a Chinese phone that has three cameras in it. For me, the future of phones is most exciting.

Imagine trying to take a picture of a window. There’s a range of light and darkness that cameras don’t capture but the human eye can. New camera technology, like HDR mode, automatically does that. HDR mode combines multiple pictures and ties the editing together for you.

As a society, we’re taking more and more pictures in higher and higher quality with our phones. The future is all about photos and, to me, that’s really remarkable. 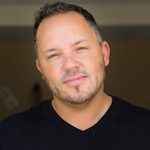 Heath Cajandig is the Vice President of Product at Mimeo. He began his journey into photography just 5 years ago. See the progression of Heath’s work on his professional photography site.

Robert Byrne is Content Marketing Manager at Mimeo. He enjoys storytelling through photography and creative writing about experiences with the people and places of his travels.